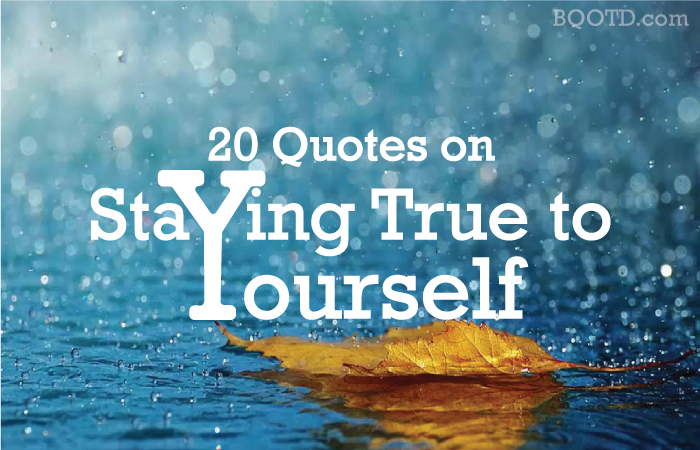 Everyone wants to believe that they’re “true to themselves,” but it’s no easy feat. The concept is hard to define and even harder to follow through on. Once out in the world with others, it’s often difficult for us to retain our sense of individuality.

Some great thinkers have advised that the self must be created or “found,” while others have warned to avoid conformity. Still others advise that we must place our focus on others or be in touch with our spirituality. The quotes below reflect the opinions of various accomplished people- great writers, philosophers, scientists, designers, and even boxers- on how to stay true to yourself.

Never follow somebody else’s path; it doesn’t work the same way twice for anyone…the path follows you and rolls up behind you as you walk, forcing the next person to find their own way.

All men should strive to learn before they die what they are running from, and to, and why.

You cannot dream yourself into a character; you must hammer and forge yourself one.

The one person who most blocks you from a full, happy, and successful life is you. He is therefore wise, who makes himself an asset. We can be our own worst enemy or best friend. So if you feel empty, as many do, start by getting free from yourself as a first stop to vibrant living.

We only become what we are by the radical and deep-seated refusal of that which others have made of us.

The man who views the world at fifty the same as he did at twenty has wasted thirty years of his life.

When you examine the lives of the most influential people who have ever walked among us, you discover one thread that winds through them all. They have been aligned first with their spiritual nature and only then with their physical selves.

It is amazing what you can accomplish if you do not care who gets the credit.

I think the reward for conformity is that everyone likes you except yourself.

Your time is limited, so don’t waste it living someone else’s life. Don’t be trapped by dogma – which is living with the results of other people’s thinking. Don’t let the noise of other’s opinions drown out your own inner voice. And most important, have the courage to follow your heart and intuition. They somehow already know what you truly want to become. Everything else is secondary.

Most people are other people. Their thoughts are someone else’s opinions, their lives a mimicry, their passions a quotation.

Knowing yourself is the beginning of all wisdom.

Not until we are lost do we begin to understand ourselves.

The most exhausting thing in life is being insincere.

Only to the extent that someone is living out self-transcendence, does he become his true self. He becomes so, not by concerning himself with self actualization, but by forgetting and giving himself, overlooking himself and focusing outward.

How many cares one loses when one decides not to be something but to be someone.

Whenever you find that you are on the side of the majority, it is time to reform.

People often say that this or that person has not yet found himself. But the self is not something one finds, it is something one creates.