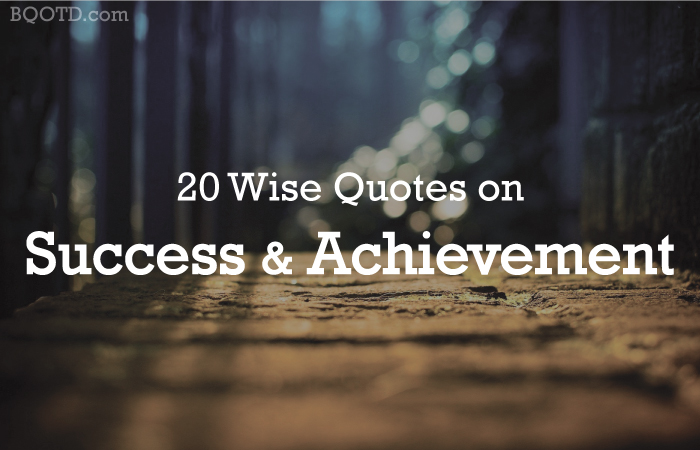 Why are success and achievement quotes so popular on the internet? It’s not as if they provide perfect blueprints for success. This would be impossible, as there are infinity routes to success that vary for each of us. So quotes by successful people don’t tell us exactly what we need to do to succeed in life. However, they do provide the inspiration and motivation that help us get “unstuck.” Sometimes, this is the only thing we need.

Knowing that those who’ve succeeded overcame the same obstacles that we face gives us the courage and insight to keep trying. So if you’re feeling stuck or in need of inspiration, here are 20 quotes on success and achievement to give you a fresh perspective.

Success is not final, failure is not fatal. It is the courage to continue that counts.

Far and away the best prize that life offers is the chance to work hard at work worth doing.

Do you know the hallmark of a second rater? It’s resentment of another man’s achievement. Those touchy mediocrities who sit trembling lest someone’s work prove greater than their own – they have no inkling of the loneliness that comes when you reach the top.

The first step toward success is taken when you refuse to be a captive of the environment in which you first find yourself.

A constant struggle, a ceaseless battle to bring success from inhospitable surroundings, is the price of all great achievements.

It is very easy to overestimate the importance of our own achievements in comparison with what we owe others.

Always be yourself, express yourself, have faith in yourself, do not go out and look for a successful personality and duplicate it.

Take up one idea. Make that one idea your life – think of it, dream of it, live on that idea. Let the brain, muscles, nerves, every part of your body, be full of that idea, and just leave every other idea alone. This is the way to success.

Always bear in mind that your own resolution to succeed is more important than any other.

A successful man is one who can lay a firm foundation with the bricks others have thrown at him.

Success is to be measured not so much by the position that one has reached in life as by the obstacles which he has overcome.

Success or failure depends more upon attitude than upon capacity successful men act as though they have accomplished or are enjoying something. Soon it becomes a reality. Act, look, feel successful, conduct yourself accordingly, and you will be amazed at the positive results.

I attribute my success to this – I never gave or took any excuse.

Do something you really like, and hopefully it pays the rent. As far as I’m concerned, that’s success.

Character cannot be developed in ease and quiet. Only through experience of trial and suffering can the soul be strengthened, ambition inspired, and success achieved.

At the end of the day, you are solely responsible for your success and your failure. And the sooner you realize that, you accept that, and integrate that into your work ethic, you will start being successful. As long as you blame others for the reason you aren’t where you want to be, you will always be a failure.

Many of life’s failures are people who did not realize how close they were to success when they gave up.

Learning and innovation go hand in hand. The arrogance of success is to think that what you did yesterday will be sufficient for tomorrow.